One of my good friends at school shared this test review activity with me. She says she always has great results and good student participation so I was eager to try it for myself.

It works like this. I had the kids draw a clock on their paper that looked like this. 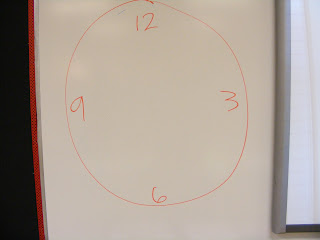 I then had the entire class stand up and told them they would have 2 minutes to make 4 appointments. They needed to make a 12, 3, 6, and 9 o'clock appointment. They could not book the same person twice and they were to sit down as soon as they made all four appointments so I would know who was finished. In each class there were several who still needed appointments after everyone else was finished, so I just told them I'd place them with a group for the appointment that they were blank on.

After their appointments were made, their clock looked like this. 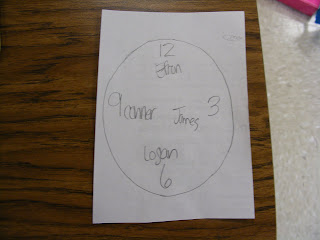 After everyone was seated, I instructed the students to go and meet their 3:00 appointment and work problems 1-8 on the test review. They could work anywhere inside the room. Most just pushed desks together and worked like this. 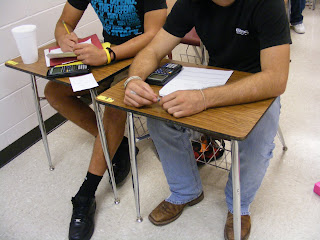 After about 10 minutes, I called time and told the students to meet their 9:00 appointment to do problems 9-18. We continued this process until the reivew was either finished or we ran out of time. The kids had a blast and asked if we could do it again sometime. I really enjoyed seeing the 100% engagement and most of the students were great about helping each other and not just giving answers.
Posted by Kim Hughey at 4:00 PM

That's funny. We had to make appointments on a clock just like that at a district staff development that I went to 2 years ago.

The teacher that I made my 3 o'clock appointment with is now my wife. :)

Did it turn into a popularity contest?

Were there some who were shunned?

I can see that happening, so I am curious.

I tried this review with my 8th grade Algebra I students - it was great! Usually whtn my students get a review - they talk all period. This time they were working hard to complete the review.

I didn't notice that some were shunned. There were a few mix-ups (not following directions) and I just assigned those clock partners.

Thanks for sharing this!