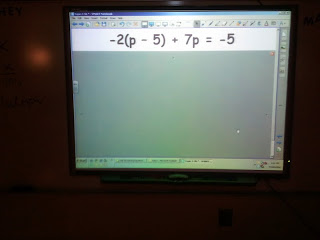 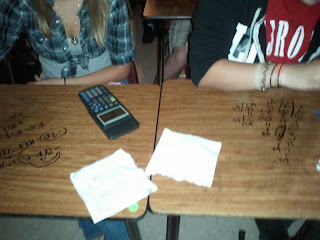 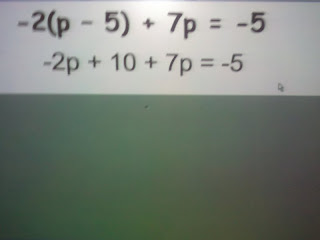 My day was made when one of my students in the last period of the day said "Can we do this more often? I really learn good like this." All the other kids chimed in, "yeah, let's do this again." I said we would definitely do it again sometime and I complimented them on everyone being on task and engaged.
Posted by Kim Hughey at 6:22 AM 4 comments:

The first year I taught at Paradise High School (2009-2010), I taught an Algebra I class that drove me crazy. I posted about this story about a group of immature, love struck boys right here. Go back and read it to get a good picture of the class atmosphere.

When I got my rosters this year, I discovered that three of the boys in that class were in one of my Math Models classes this year. I was really torn. At our school we have the right to refuse to teach any student who has previously failed our class. I really wrestled with whether or not to leave the three boys on my roster or give them to someone else. In the end I kept them and I couldn't be happier.

I had the best experience today. My math models classes were doing an "Around the World" activity today to prepare for tomorrow's test and I was walking around helping and generally making sure everyone was staying on task. All three of these students were working and even being successful on "difficult" word problems. I couldn't help but comment on how much they had improved since their freshmen year and how they didn't even seem like the same students. I told them how helpless I had felt at not being able to help them succeed in Algebra I. I really struggled with that class and had great doubts in my teaching ability due to the 75% failure rate of the class.

One of the boys said to me, "Mrs. H, why would you blame yourself? It's never the teacher's fault! We were just lazy! You shouldn't beat yourself up. You are a good teacher or how else would we be able to do the math we are doing right now?"

Needless to say, I was shocked! They were doing the math! All this time I have believed that they didn't learn anything that year. And speaking of that, how did they learn anything? They didn't do any homework. Many of their tests were turned in blank or half-completed. It seemed as if I was teaching to a brick wall. But here they are as juniors, being successful in my class! Maybe their Geometry teacher finally knocked some sense into them or maybe they just grew up. I'm not sure what happened, but I think it is going to be a great year!
Posted by Kim Hughey at 5:56 PM 1 comment:

Please stop by and see Jen @ lil Mop Top today for her Teaching Thursdays. She shares a great Pair Share acitivity for reviewing linear equations.
Posted by Kim Hughey at 6:26 AM 2 comments: